Being able to survive in tough conditions is difficult and it requires a lot of courage. Only some people have the capability to survive in such conditions and this American television personality Ricko DeWilde is one of them.

His amazing hunting skills and ability to keep calm in the worst conditions when anyone could panic makes him one of the best and most amazing survivors of all time. He is best known for his reality show “Life below zero”, let’s learn more about this survival expert. 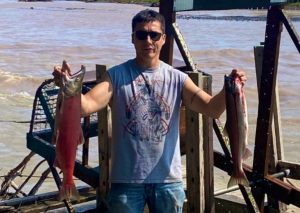 This 46-year-old survival expert is an American-Athabascan Indian, who was renowned after appearing in a reality TV show on National Geographic’s channel. His life was very complicated since his childhood but he stood firm and overcome all the hurdles of life. He never forgot his family values and traditions taught by his parents.

Things Ricko Dewilde’s fans want to know about him:

On the 7th of June, 1975, Ricko was born to a family residing in Alaska, America. He had a tough childhood and suffered a lot. Lloyd and Amelia Dewilde, both of his parents died when he was very young so he along with his 13 siblings managed to survive on their own.

He never disclosed any information about his wife or children but we do know that he is married and has five children. Ricko Dewilde wife and his children live in Fairbanks city but it is unclear if she is the mother of his children or not.

Having a net worth of 250,000 US dollars, Ricko Dewilde is doing great in his career and he charges 4500 US dollars per episode of his famous reality show “Life Below zero”. He is also a great hunter and fisherman and active on social media which surely helps him in earning more.

National Geographic’s most-watched reality show helped him gain popularity, he appeared in the 11th season of Life below zero. This show tells the stories of people who are living in extremely low-temperature conditions in Alaska.

He got the chance of getting in the show due to his hunting skills recognized by the producers, after giving the best of his skills in the show, he appeared in more than 30 episodes and managed to have a huge fan following.

There are few people in the world who love to explore and hunt in freezing temperatures and Ricko is one of them. Here are some facts about this National Geographic star that many people don’t know:

How active Ricko Dewilde is on social media:

Before appearing in “Life below zero”, Ricko Dewilde used to share his experience with his subscribers on YouTube and he already had a fan following, however, after becoming popular his followers were rapidly increased and now he is everywhere including on Twitter, Instagram, and Facebook. People are loving his work and he’s getting more attention and appreciation.

Living in below zero degree temperature areas is quite hard but some people enjoy it and love to find ways to survive in such harsh conditions and Ricko Dewilde is one of them. His reality show “Life below zero” is our favorite in which we get to watch new ideas and problem-solving techniques which is really helpful for other people living in areas like Alaska.